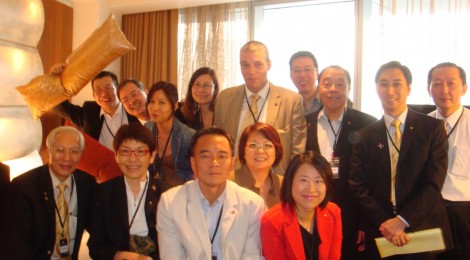 In what had probably been the most challenging economic and social environment in the 45 years of the Club’s existence, there was no surprise that the previous year’s Rotary theme “Make Dreams Real” was now followed by the more introspective „The Future of Rotary is in Your Hands“. It actually got to ” The Future of Rotary Is in The Hand” in the final emails by DG Ada Cheng and had me, when I first heard of it, gripe to IPP David Wright “the poorest Theme I ever heard from a charity – here, Rotary and its survival become more central than the sharing and caring philosophy it is based on: this year, we seem to be like a Chinese political party or a self-serving sect or something. So inarticulate!”

However, thinking about it in context of the Dream-Theme, the theme could actually be comented to fit RCKN’s shared principles: while many of us had had to revisit their cherished vision of the future and maybe made adjustments to the promises it seemed to hold less than a year ago, WE WILL not put the ideals of Rotary on hold until the world and our lives and companies are back to normal. WE WILL consciously keep our commitment to helping the destitute, whose wretchedness was never lessened by the world economy when it was booming – they are part of our spiritual family: kids in Mongolia, ophthalmic children and lepers in Guanxi Province, victims of the Sichuan Earthquake, the sick and those in need of education where no water, no shelter, no hygiene and where no local government is around to help them get out of their misery on their own. The world had become more difficult, the dreamed of future might have moved a little further out, but we wouldn’t leave our families behind. No one in their right mind would.

The Hands on the Ground – Membership

The physical family of RCKN by that time consisted of 33 members to which 3 were joined, albeit one of them resigned before the close of her second year and the other two had never been seen again after their induction. It might be due to the abundance of shadow members – each year had grown their number by a few – that one recurring, and never conclusively ended discussion with district was uncertainty about our true amount of Honorary Members in comparison to Exempted Members (at Handover to PE Bob Lloyd, the club seemed to have no Honorary Members and 7 Exempt ones.

This said, RCKN continued its remarkable hands-on contributions were help was needed: 17 causes were taken on in 9 Board Meetings over the period

A note on Item 9 – with support from Hong Kong Red Cross and Hong Kong Red Cross John F. Kennedy Centre (school for special education), Area 7 launched the “Our Future is in our Hands” Creative Photography Workshop and Competition project in November 2009, which provided an opportunity for disabled or intellectually challenged children to enhance their crea¬tivity, build confidence & express their inner world through a series of tailored photo¬gra¬phic activities (workshops, outdoor photo-taking, competition, exhibitions & sharing assemblies).

The project culminated in two public photographic exhibitions and the publication of a commemorative photo album on 22 March, 2010 at Central Library (hosted by former Miss HK and actress Mary Cheung) and on 15 June 2010 at Lincoln House, Taikoo Place.

The project was awarded RI Best Co-operative Award that year.

Ever since I joined RCKN in President Howard’s year 2005-06, the Club had had some pale and guilty person living in misery for never catching up with the Club’s supposedly weekly gazette “The Sampan”. It reports on luncheon events and everything notable.

Then again, after I had taken it upon myself to produce the feature (producing all in all 2 or 3), it turned out that, more than 10 years after its launch, the Club’s website did in no way meet the dummy ease of present day website administration any more – uploads required the full personal attention of the Club’s own and ever helpful webmaster Andrew Stinson in Australia, who would do his best whenever his busy schedule allowed, but then needed to be approached again and again to deal with loss of formatting that always happened…

Thus, we took the future of the RCKN Website in our hands. PE Bob Lloyd took it upon himself to develop the new site and lived the pleasure of finding himself re-born as a full-fledged computer geek; he had a period where he puzzled people at luncheons and board meetings with fairly opaque requirements and completely arcane solutions he was involved with – a bit like breeding Koi – but finally he quite single handedly set up the new RCKN virtual home at www.rckn.350.com.
This was based a website www.350.com which offered web page creation without the need for high tech knowledge and had Rotary specific templates, full service at US$79.99 (HK$624) per year.

It would be a matter of President Bob’s own year 2010-11 to combine the ease with which the new site could be maintained with the beauty and massive content of the old site at http://rotary3450.org/clubs/kowloon-north/ . Later, the Club’s URL got changed to http://rckn.org/. Bob would have expressed this much more succinctly.

Emba Leung & István T. Horváth organized the tremendously successfull and entertaining annual RCKN Charity Ball on May 8th 2010. It was themed “Ball of Revolution Amours across Continents”, or in short, “some Revolution Amour Theme” and allowed participants to dress up in costumes of the relevant time and continents where any sort of revolution had ever taken place. Get it? Anyway, the Theme, given that the logo of the organization we all serve before self is a wheel, was probably the most Rotarian of the decade.

Other Hands Down awesome Business

During the year, we also organized 15 fellowships, the most memorable of which were certainly Gary and Kamal Harilela’s Golden Wedding Anniversary Reception in 2009 and PP Bill Benter’s Wedding Reception in 2010.

On a smaller scale, a roisterous BBQ at the Royal HK Yacht Club’s Middle Island Club House took place in October, a Bowling Evening was held (and caught on tape at www.youtube.com/watch?v=Vgp_VDy7ckE) in November; in March the members followed Stig of the Dump David Wright dauntlessly to a Landfill visit and in June they, as dauntlessly, met Donald Tsang at the District Luncheon.

The overall experience to suddenly be somehow at the centre of all these activities is probably one of the most rewarding acts of self-discovery possible: while everyone ends up a bit exhausted, over time we all discover that we actually succeeded in something that would have seemed quite far beyond our usual skills of administrative leadership – and that we did so with the help of our Club, despite the fact no one ever answered to emails, or some always answered “to all”, getting me 2,589 emails during my presidential year: whatever the gripes – the awe finally returns and persists.