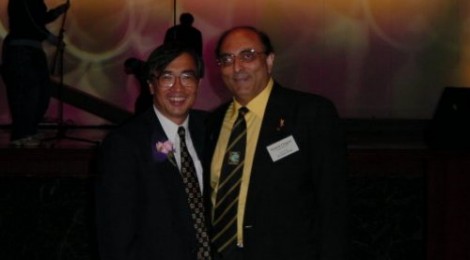 It was a very skimpy meeting last week, with only 10 people present, one of whom was the speaker and the other a visiting Rotarian – Rainer Jungjohann, from the Rotary Club of Norderstedt in Hamburg, Germany. The week itself however, was eventful and on Friday evening I attended my first District Installation Ceremony – see District News for more on the evening.

Congratulations to PDG Joseph who, on Friday evening at the District Installation Ceremony, was presented the Rotary Foundation Citation For Meritorious Service in recognition of his devoted efforts for the furthering of better understanding and friendly relations of peoples of the world. 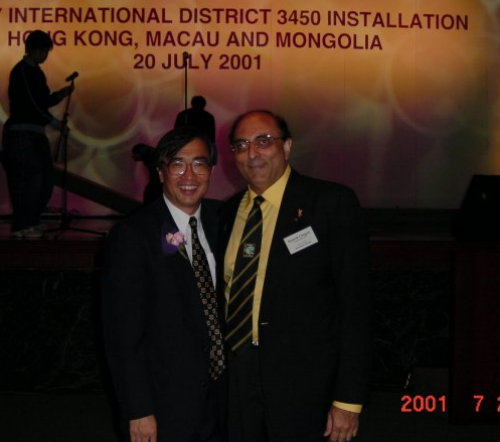 This annual award is only presented to one Rotarian from each district and PDG Joseph is most deserving of this honour.

Last Week’s Speaker was Dr. Hans Schradder of Matilda Hospital who gave a very interesting talk about Cholesterol and Heart Disease, explaining the difference between “good” cholesterol (HDL) and “bad” cholesterol (LDL). He caused concern to the men in his audience by telling them that all men have a 5% chance of developing heart disease due to cholesterol, but added that changing your lifestyle (in the form of diet and exercise) need not be drastic and can be relatively easy. The good news is that a 1% reduction in your cholesterol levels, equals a 2% reduction in risk. 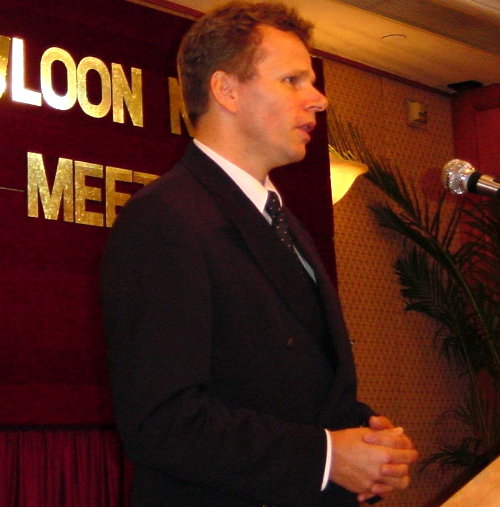 At the request of some members who were unable to attend the meeting, I have attached a handout from Dr Schradder, entitled “Cutting the Fat and Cholesterol for a Healthy Heart”.

This Week’s Speaker (Friday 27th July) will be Mr Andrew Lynch, the Editor of the iMail Newspaper.

The District Installation Ceremony on Friday 20th July was attended by President Ramesh & his lovely wife Regina, PE David (who was standing in for IPP Bill), PP Gary, PP Robert, PP Steve, PP Peter Lo and Rtn. Nicole. PDG Joseph was also present, but being the recipient of the Meritorious Service Award, was seated at a table with other Rotary dignitaries.

It was my first Installation Ceremony and it was quite an experience. The evening kicked off with a reception & fellowship in the reception area for the Grand Hall on Level 5 of the HK Convention and Exhibition Centre, with it’s fabulous views of the sunset over Victoria Harbour and TST. 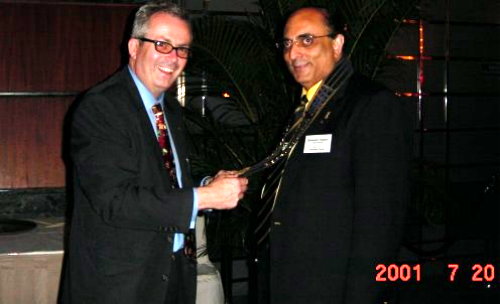 Patience David, your day will come

At 7.30 we were all called in to the Grand Hall and seated at our respective tables, and the ceremony began. A lone Piper piped in the DG’s and guests of honour and then the Club Presidents were called to the stage. I knew the District had a lot of clubs, but until the Immediate Past Presidents and Incoming Presidents were announced and lined up in rows, I didn’t appreciate just how many – 49. 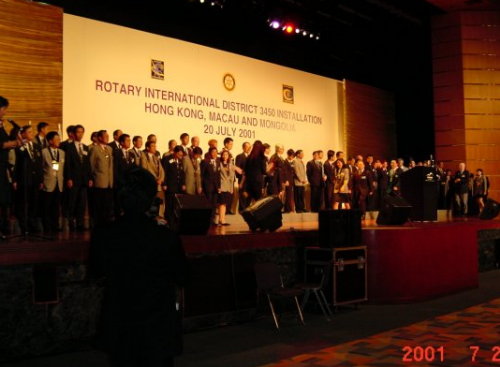 District Governor for the year 2000-2001, John Wan gave a speech about his year as DG and what the ideals of Rotary had meant to him and his family and then called on the IPP’s to hand over the mantle to the Incoming Presidents. The IPP’s then left the stage and, after honouring various Rotarians (amongst them our own PDG Joseph), IDG John Wan installed his own replacement, Mr Johnson Chu, as District Governor for the year 2001-2002. After DG Johnson Chu’s own short speech, the Club Presidents were piped off the stage – although more than one of us wondered whether there was some hidden message in the fact that they were piped off to the theme tune of Monty Python!

The evening wound down with a performance by Mr Henry Shek and The New Philharmonia of Hong Kong who gave us a fine rendition of both traditional opera and Broadway hits. 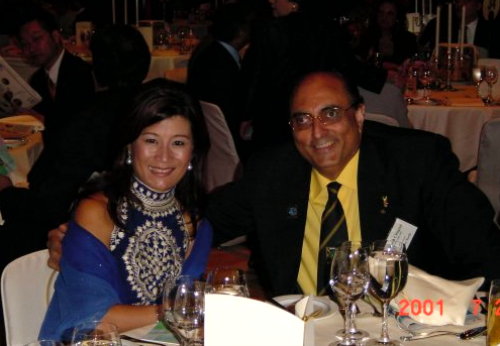 Some of you will already have these dates in your diary, but for those of you who have been out of town during the last few weeks, the following important dates are coming up.

Saturday 4th August: A Membership Development Seminar will be held from 2:00 pm – 6:00 pm at The Hong Kong Academy of Medicine Jockey Club Building, 99 Wong Chum Hang Road, Aberdeen, Hong Kong. Our Club needs at least 5 participants, but would prefer more. So far the following members have confirmed – President Ramesh, IPP Bill, PP Peter Lo, PE David and Rtn. Susie. The Seminar is in connection with a worldwide Rotary campaign called Rotary’s Global Quest, which is the most ambitious membership campaign in Rotary’s history. Keynote Speakers will include RI Zone Coordinator PDG Vincent To, DG Johnson Chu and Membership Development Chairperson PDG Paymond Wong. Please mark this date in your diary and let President Ramesh know if you will be attending.

Friday 3rd – Monday 6th August: our sister club from the Philippines, The Rotary Club of Mandaluyong, are planning to visit us in Hong Kong.

Saturday 4th August: PP Gary has organised a Fellowship evening in honour of our sister club, The Rotary Club of Mandaluyong, at The Viceroy of India restaurant in the Sun Hung Kai Centre, 30 Harbour Road, Wanchai, for Rotarians plus 1 guest. The evening will start at 7.30 for fellowship, followed by dinner. Cost for dinner plus one drink will be HK$250. Please advise PP Gary if you can attend and whether you will be bringing a guest.

President Ramesh received the following message from President Henry of The Rotary Club of Mandaluyong, who had asked that his thanks be conveyed to our Club:

On behalf of our club members and the Anns, I want to thank you from the bottom of my heart for your warm hospitality in advance. It will be our pleasure to attend your dinner fellowship on August 4th at the Viceroy of India Restaurant. We’ll inform you early next week as to the exact number of people attending. Thank you very much and see you soon.

THIS WEEK IN HISTORY

1376 – The legend of the Pied Piper of Hamelin leading rats out of town is said to have occurred on this date.
1587 – A second English colony was established on Roanoke Island off North Carolina. The colony vanished under mysterious circumstances.
1926 – Babe Ruth caught a baseball at Mitchell Field in New York. The ball had been dropped from an airplane flying at 250 feet.

1914 – Austria-Hungary issued an ultimatum to Serbia following the killing of Archduke Francis Ferdinand by a Serb assassin. The dispute led to World War I.
1962 – The “Telstar” communications satellite sent the first live TV broadcast to Europe.

1979 – Little Richard, known as Reverend Richard Penniman, spoke at a revival meeting in San Fransisco. He warned the congregation about the evils of rock & roll music!
1987 – Hulda Crooks, at 91 years of age, climbed Mt. Fuji. and became the oldest person to climb Japan’s highest peak.

1799 – Napoleon Bonaparte defeated the Ottomans at Aboukir, Egypt.
19?? – Membership/Classification Rtn. Michael Harilela was born.
1990 – Rosanne Barr sang the National Anthem in San Diego before a Padres baseball game. She was booed for her performance. (Hmmm, we know how that feels!)

1909 – Orville Wright set a record for the longest airplane flight. He was testing the first Army airplane and kept it in the air for 1 hour 12 minutes and 40 seconds.
1914 – British troops invaded the streets of Dublin, Ireland, and began to disarm Irish rebels.
1953 – The armistice agreement that ended the Korean War was signed at Panmunjon, Korea.

1540 – King Henry VIII’s chief minister, Thomas Cromwell, was executed. The same day, Henry married his fifth wife, Catherine Howard
1794 – Maximilien Robespierre was sent to the guillotine. He was a leading figure in the French Revolution.
1914 – World War I began when Austria-Hungary declared war on Serbia.
1945 – A U.S. Army bomber crashed into the 79th floor of New York City’s Empire State Building. 14 people were killed and 26 were injured.
1976 – An earthquake in northern China killed at least 242,000 people.

Well, that’s it for this week folks!