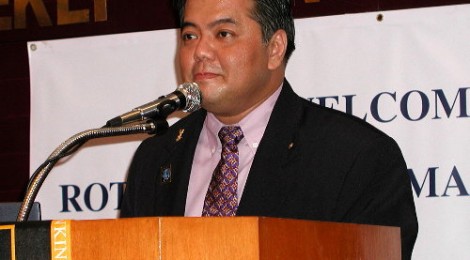 What a meeting we had this week! Attendance picked up a little (15 members), which was just as well as we were still outnumbered by our 30 guests.

President Ramesh kicked off the meeting by introducing President Henry L Uy of our sister club, the Rotary Club of Mandaluyong. President Henry (a very jovial man who obviously was enjoying himself) introduced to us by name, each of his fellow Rotarians and their spouses (27 in total and I’ll never remember all of their names!) and then gave a short speech thanking President Ramesh, First Lady Regina, IPP Bill & our Club for our hospitality. He spoke of the 23 years of sistership between our two Clubs and pledged to work for closer communication and cooperation between us in the future. 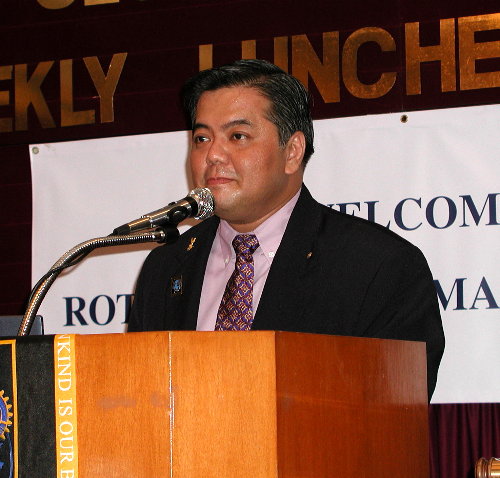 He and President Ramesh then signed a renewal of the Sistership Agreement and exchanged banners and gifts. All I can say, is someone must have had overweight baggage – they brought us a beautiful traditional mirror surrounded by special seashells, 2 lamps, and several other small gifts for the Club. In return, President Ramesh proudly presented them with a painting called “Beauties Playing Flute in Harmony” by famous artist Li Shi Gang, who was born in Hebei Province in 1966 and whose work is recognised by collectors. 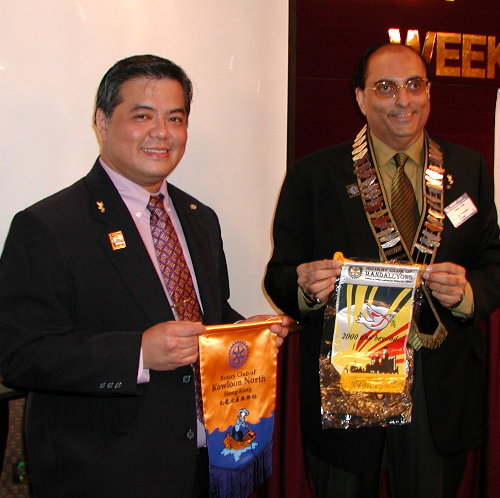 As it was Rtn Brian’s birthday this week, President Ramesh congratulated him and presented him a gift. I think Brian was taken by surprise – he cringed at the thought of it, but must have been impressed with our rendition of Happy Birthday, which was significantly more melodious this week. Have we been taking lessons or must I attribute it to our guests from the Philippines (who, after all, are well known for having wonderful voices)? 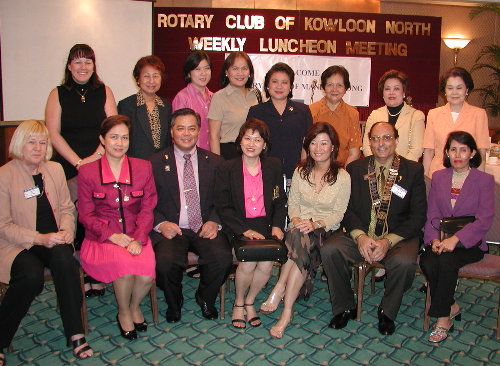 IPP Bill then took to the lectern to tell our guests a little bit about our Club and our three major Service Projects – Camp Quality, The China Baby Formula Project and The 3 Schools Project in Guangxi – and the history of each of them. He also told us a little about his district visit to the Rotary Club of Mongolia which, despite being the remotest Rotary Club in the world, has 42 members! You can look forward to a report on IPP Bill’s trip, shortly.

Finally, PDG Joseph introduced his 2 guests – Jan Hradil (aged 20) & Tomas Soukup (aged 21) who are visiting students from the Czech Republic. Jan & Tomas are students of the Faculty of Medicine at Charles University, Hradec Kralove in the Czech Republic with a special interest in spinal and neurosurgery. Jan gave a short speech of thanks, explaining that he and Tomas have been partly sponsored by IPP Bill for their 2 month elective stay at the Department of Orthopedic Surgery of the University of Hong Kong, Queen Mary Hospital. In order to be able to come to Hong Kong, they had requested financial support from our District, through The Rotary Club of Jablonec, Czech Republic.

(Friday 3rd August) was Chief Superintendent Mr Ip Lau-chen Kenny from the Narcotics Bureau, who talked about “The Abuse of Drugs by Young Persons”. 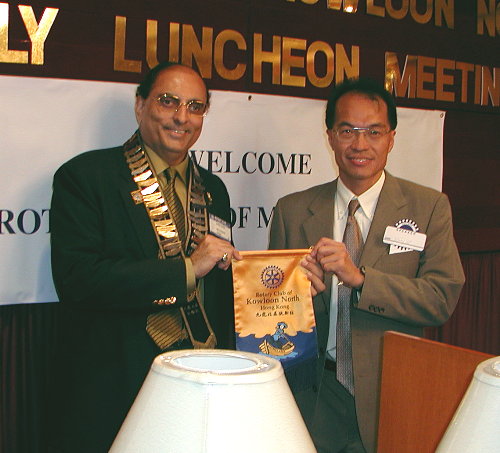 There has been a significant increase in the use of psychotropic drugs amongst young people as they are becoming less and less expensive – for example, a hit of ketamine (the most “popular” drug) which last year was HK$350, is now HK$80 – and from September this year, the police will be paying greater attention to prevention, combining this with enforcement, and will be targeting young people through talks in the schools. Not surprisingly, the subject evoked concern in the parents amongst us, and several questions for Chief Superintendent Ip after he had finished his talk.

(Friday 10th August). This week we do not have a speaker, so President Ramesh will be showing a video given to him by PDG Raymond Wong, entitled “Rotary In Your Community And The World”. This was aired on CNN sometime ago and it is quite inspiring to see what Rotary does for the community all over the world. The Video lasts for 29 minutes

Our birthday celebrant this week is Rtn. Papu who shares his birthday with singer Whitney Houston and actress Gillian Anderson (of The X Files)

1859 – The escalator was patented by Nathan Ames (and Hong Kong thanks you).

1945 – The US dropped an atomic bomb on Nagasaki. The bombing came three days after the bombing of Hiroshima. About 74,000 people were killed. Japan surrendered on August 14th.

1965 – Singapore proclaimed its independence from the Malaysian Federation

1974 – US President Richard Nixon formally resigned. Gerald R. Ford became the 38th president of the US
DATES FOR YOUR DIARY

Friday 10th – Sunday 12th August: The Camp Quality Summer Camp will be held over the weekend of 10th – 12th August, at Guangdong International Sports Youth Hostel. If anyone is free to help out and/or would like further details, please contact “First Lady” Regina Chugani at 94640030.
Saturday 8th September: The District Rotary Foundation Seminar (DRFS) is to be held from 9 am – 3 pm at The Hong Kong Academy of Medicine Jockey Club Building. The registration fee is HK$320 per person (including lunch & coffee break) and all members are highly encouraged to attend. The District hopes that at least 4 – 5 members from each club will attend. If you are able to attend, the Enrollment Form can be downloaded from the District website and should be completed and returned by 24th August.

Friday 16th November: DG Johnson Chu will be joining our Friday luncheon meeting, so be sure not to miss this one.

PP Gary had organised a wonderful evening at The Viceroy Indian Restaurant on Saturday 4th August in honour of our guests – members of our sister club, The Rotary Club of Mandaluyong. Since it was a balmy evening, we met on the terrace at 7.30 and mingled before we were called in to dine. 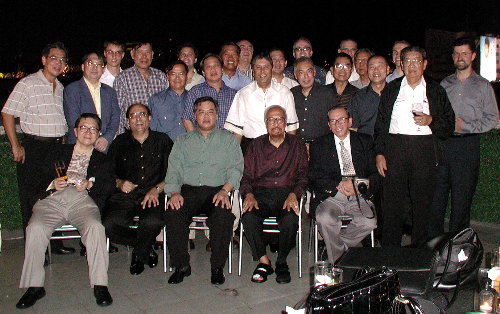 On the terrace at Viceroy

Dinner was buffet style and each table was beautifully decorated with rose petals. Our guests were certainly not the shy and retiring types and before dinner was finished, President Henry had discovered the microphone and there was no stopping him. We were treated to Philippino songs from members of the RC of Mandaluyong, a lovely rendition of Memories from PP Patrick’s wife Helen and a rousing Czech tune from our two visiting students Jan & Tomas. 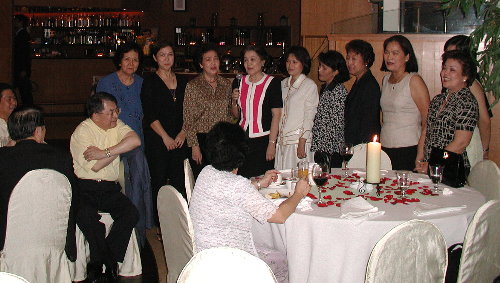 Serenaded by the ladies

As our guests were travelling to Shenzen early the next morning, the evening finished at 10.30 with promises extracted that we would visit them next time.

Finally, The Rotary Club of Mandaluyong left us with three presents, which they have asked us to Raffle and in addition, IPP Bill has kindly donated a bottle of wine from his winery to the draw. Therefore, starting from this Friday’s meeting (August 10, 2001) and each week thereafter, we will have a Raffle Draw. Tickets will cost HK$20 and Rtn Nicole will be selling them at each meeting.

I look forward to seeing you all this Friday