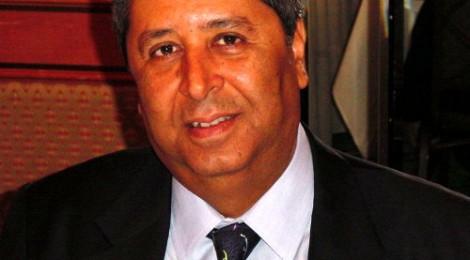 It was nice to see some of my fellow Rotarians back this week after their long vacations – the ever irrepressible PP Gilbert, our very own Blues Brother Rtn. Howard (you look so cool!) and a newly furry-faced Sgt. at Arms Frank (does it still itch Frank?).

President Ramesh congratulated Rtn Papu on his birthday and we all serenaded him with a very tuneful (at last) rendition of Happy Birthday. 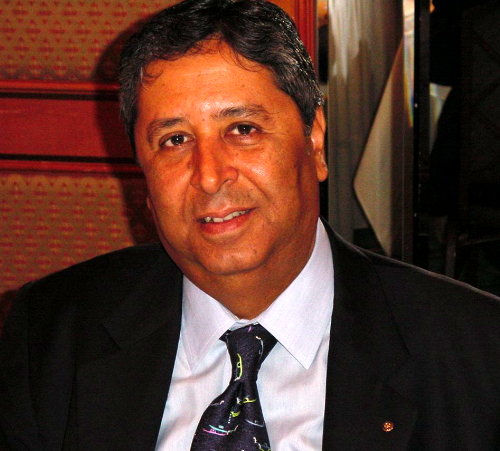 Last week, The Rotary Club of Mandaluyong, in addition to the gifts they presented specifically for the club, left us with three gifts which they asked us to raffle and it was decided that we would raffle one each week. In addition, IPP Bill kindly donated a bottle of wine from his winery to the draw. This week therefore – to the relief of our Sgt at Arms – instead of contributions to the ubiquitous “box”, tickets at HK$20 each were sold for the first Raffle Draw. HK$1,100 was raised and the winning ticket – drawn by PP Gary – was held by Rtn Brian who won one of the gifts from the Philippines. I will be selling tickets again at the next meeting. 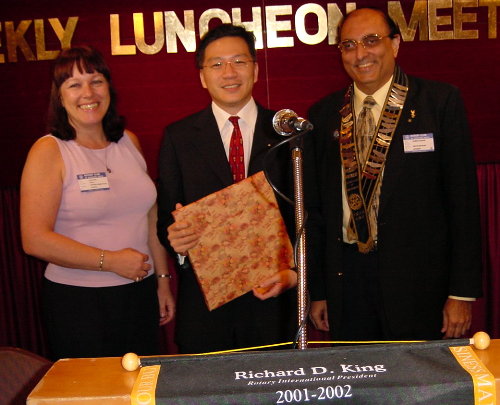 President Ramesh also presented me with the beautiful seashell mirror which was gifted to the club, as thanks for writing this newsletter. I want to thank you all for this and for your encouragement – but I certainly cannot take all of the credit as IPP Bill is still putting in a lot of work, posting this and the various photographs to our website. 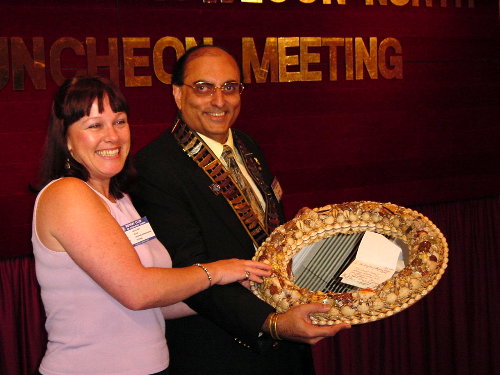 Presentation of the seashell mirror

In addition to these gifts, RC Mandaluyong also presented the club with a donation of HK$5,000 for contribution to a club project of our choosing. Thanks guys!! I think you also left some singing skills behind for which I, for one, am extremely grateful.

President Ramesh reminded members that a proposal had been put forth to replace one Friday lunchtime meeting a month, with a Thursday evening Fellowship Meeting (probably the first or last Thursday of every month). He asked all members to please let him have their views on this and a decision will be made and – if agreed – implemented next month.

Finally, as you all know, I am new to Rotary and still finding my way with the traditions and the meaning of Rotary. I still have that “gung-ho” feeling that I’m sure you all experienced in the first months after your induction, but I know also, that feeling can wear off when the “novelty” becomes “everyday”. I’ve been sampling various Rotary sites on the internet when I get the time and for those of you who have not read it, I would encourage you to visit this link and read President Richard D King’s speech at the RI San Antonio Convention this year. It really is inspiring.

1248 – The rebuilding of the Cologne Cathedral in Cologne, Germany, began after being destroyed by fire, and 632 years later…
1880 – The Cologne Cathedral in Cologne, Germany was (finally) completed after 632 years of rebuilding!!! (Jolly good thing they don’t build that slowly in Hong Kong!)
1896 – Gold was discovered in Canada’s Yukon Territory. Within the next year more than 30,000 people rushed to the area to look for gold.
1917 – China declared war on Germany and Austria during World War I.
1945 – Japan surrendered unconditionally. The surrender ended World War II.
1947 – Pakistan became independent from British rule.
1956 – A Washington, DC DJ, Bob Rickman, created the Society for the Prevention of Cruelty to Elvis Presley.

17th August: Rtn. M S Kalra’s birthday coincides with our weekly luncheon meeting this year. He shares his birthday with Davy Crockett who was born on this day in 1786, sexy screen siren Mae West born in 1893 and movie mogul Samuel Goldwyn born in 1882.

1815 – Napoleon began serving his exile when he arrived at the island of St. Helena.
1903 – Joseph Pulitzer donated a million dollars to Columbia University. This started the Pulitzer Prizes in his name.
1945 – The nationalists of Indonesia declared their independence from the Netherlands.
1961 – The Communist East German government completed their construction of the infamous Berlin Wall.
1962 – 18-year-old Peter Fechter was killed by East German border guards when he attempted to cross the Berlin Wall into the western sector.
1969 – After three days, the Woodstock Music and Art Fair in New York came to an end.
1987 – Rudolph Hess died after apparently committing suicide. Hess was the last member of Adolf Hitler’s inner circle.

Last Week’s Speaker (10th August) We had a change this week and instead of a speaker, President Ramesh showed a video given to him by PDG Raymond Wong, entitled “Rotary In Your Community And The World”. This 29 minute video was aired on CNN sometime ago and it was very informative and interesting to see what Rotary does for the community all over the world.

President Ramesh announced at the meeting, details of the District Rotary Foundation Seminar to be held on 8th September. The seminar aims to educate District Rotarians about the international programs – Polio Plus, Group Study Exchange (GSE), Ambassadorial Scholarships, Matching Grants from RI and many more – of Rotary Foundation. New members especially, will benefit from this seminar as it will hopefully inspire them by introducing to them, international programs about which they may not have been aware. Long term Rotarians – in particular, office bearers – are also encouraged to attend.

To encourage more members to attend, the Registration Fee has been reduced this year to HK$320 – which includes lunch and coffee break. Regional Rotary Foundation Co-ordinator PDG Jackson Hsieh from Taiwan will be a keynote speaker and District Foundation Chairman PDG Anthony Hung promises the day will provide interesting and practical knowledge.

The District Swimming Gala will be held on Sunday 23rd September at Ma On Shan Swimming Pool from 11.00 am to 6.00 pm and is the first sports event for the District this Rotary year. Fees will be charged on a club basis.

This is going to be a fun-filled fellowship occasion for all Rotarians and their family members in an atmosphere of fair competition and the organisers hope that as many members and their families as possible will attend and/or participate. Each participant registered for and taking part in the events should be free from any known physical impediment that would render them not suitable to take part in the swimming competition, as Rotary will not be assuming any liability in the event of an accident arising from participation. (So, if you need a rubber ring before you go near the water, don’t try this!)

I will be handing out details and registration forms over the next few meetings, but if you would like these in the meantime, please call me at 25316666 and I will fax them to you.

The evening of Saturday 8th September will be a Race Night, (Horse Race – for those of us who are not part of the racing fraternity) and so President Ramesh has decided to organise a Fellowship Evening, at Shatin Racecourse. This will be a nice finish to the Rotary day for those members who attend the seminar, but of course the fellowship evening is open to all Club members and a guest. The cost will be approximately HK$500 per person (to be confirmed) and this will include a meal and drinks for the evening. All bets placed are at your own peril, but be assured we will ALL help you celebrate if you win!! Unfortunately, President Ramesh’s own horse will not be running, but we are hoping to organise another race event later in the year so that you can have a “flutter” on his horse then.

If enough members are able to attend, President Ramesh will be able to organise a box (minimum requirement is 30 people) or else a table (for up to 20 members). The races start at 7.30 pm so we would aim to meet at 6.30 pm (full details will be given closer to the time).

It feels like quite a while since we had a fellowship evening and most members should be back from their vacations by then, so let’s all get together. If you can’t make it for 6.30 don’t let that discourage you from attending as President Ramesh will be able to give you your entrance badge at the Friday luncheon meeting and you can join us inside.

A reminder that August has been designated Membership and Extension Month. In addition to this, RI President Richard D King announced the launching of Rotary’s Global Quest, a major campaign to increase Rotary membership worldwide. Characterised by the President as the “most amibitious, far-reaching membership campaign in Rotary’s history” the Global Quest calls for each Rotary Club to bring in – and induct – at least one new qualified member each month during the 2001-02 Rotary year, with a minimum net gain of five new members per club at the end of the year. So, if you know someone who would make a good Rotarian, why not bring them along to one of our meetings. After all, the more the merrier!

Saturday 8th September: The District Rotary Foundation Seminar (DRFS) is to be held from 9 am – 3 pm at The Hong Kong Academy of Medicine Jockey Club Building, Aberdeen, and all members are highly encouraged to attend. (See above for details.)

Saturday 8th September: “An Evening at the Races”. This fellowship evening will be at Shatin Racecourse and the races commence at 7.30 pm.

Friday 16th November: DG Johnson Chu will be joining our Friday luncheon meeting, so be sure not to miss this one.