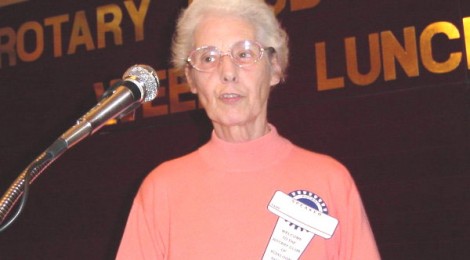 Wow – what a good turnout we had last week. It was great to see so many of us all together in one place. We were also joined by three guests, whom we hope will become fellow Rotarians. They were Ian Petersen, a frequent visitor attending as PP Gilbert’s guest; Terry Hart, who spoke to us several weeks ago and who was attending as VP Nic’s guest; and Carole Bird who – together with her husband – turned up to help at the Camp Quality Christmas Party and who was attending as IPP Bill’s guest.

Our Sergeant at Arms reported no fines and a total contribution to the box of HK$800.

Intl Service Director Brian gave us a brief report on his trip last week, to the ground-breaking ceremony of the New Schools Project in Du’An County, Guangxi. He told us that when he arrived, there were hundreds of students waiting to welcome him and that over 1,000 students attended his speech, together with Government officials. A full report is now available on the website (click here) and the translated text of his speech was included in last week’s The Sampan.

President Ramesh then reported that our sister Club RC of Taipei North has invited us to attend the R.I. Asian Presidential Conference in Taipei from 22nd – 24th March (full details under Rotary News). Anyone who is interested in attending should please contact President Ramesh as soon as possible.

Finally, please do read this week’s “From the Breadbasket” article and visit the following link to read a very important appeal by RI President Rick King:http://www.rotary.org/services/board/appeal.html

Last Week (4th January) Miss Valerie Conibear from the Home of Loving Faithfulness spoke to us about the Home and what it does. 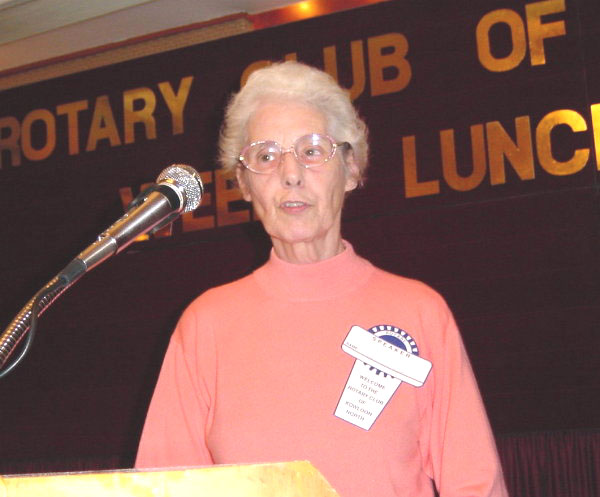 Valerie Conibear from The Home of Loving Faithfulness 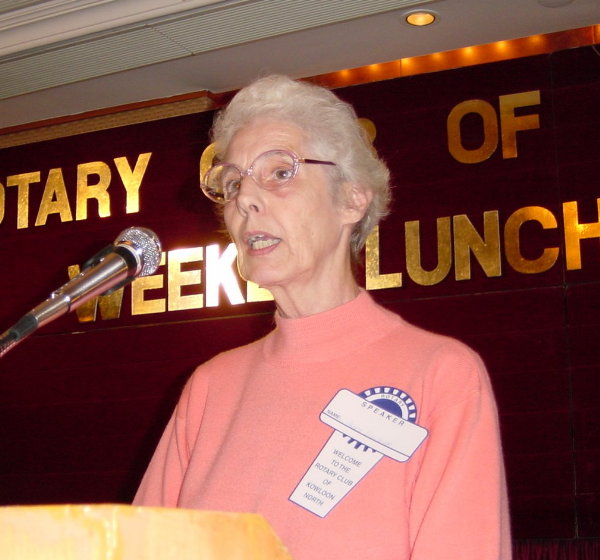 Valerie arrived in Hong Kong in 1960. She and her friend, Wendy Blackmur, were serving in a Christian Mission home in Hong Kong for normal children who had been found abandoned, when they felt “a calling from God”. After much soul searching, they set up The Home of Loving Faithfulness which opened its doors to severely mentally and physically disabled young people in August 1965.

Their first premises was a rented bungalow in Fanling which could house up to 10 children. That soon became too small and in 1971 they moved to a rambling old property in Sheung Shui, which was purchased with the help of a very generous anonymous donation to the Trust that Valerie & Wendy had established for the Home. The property had extensive grounds (1.25 acres) which would be able to accommodate future extensions.

Once the mortgage was repaid, renovation was begun and in 1990 the old house was vacated and the family moved into new two-storey units. In 2000, construction began on The Ark – the fourth block, where 2 family units will home 10 younger children with varying disabilities. House parents are responsible for a “family”each, with the aim of living just like a normal family so that the children have the opportunity to learn social, self-care and domestic skills.

The Home cares for residents from babyhood, with some of their long time residents now being over 50 years old. For all of those who are admitted, the Home’s commitment to them is for life. Children are referred through Social Welfare or privately, but many have simply been abandoned. The Home will generally only accept a child from a family, if the family cannot afford to pay for the child’s care and upkeep.

Whilst it was not their original aim, in 1978 the first ‘outside’ adoption took place. Since then, they have slowly seen other children who were considered unsuitable for adoption, being adopted – often by friend or contacts of the Home.

With the use of slides, Valerie told us many stories of the “children” in the family. She and Wendy share a common motivation which sustains them in their demanding work – a conviction that it is God who has not only called them to the work, but who provides for them. They and their full time volunteers receive no salaries and appeals for money are never made by the Home, yet each one is fully provided for personally, as are all the needs consistent with running a large house. 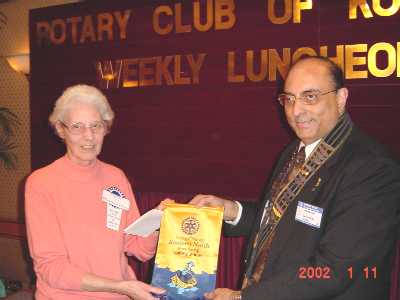 The R.I. Asian Presidential Conference will be held from 22nd – 24th March in Taipei. Our sister Club, RC of Taipei North, has taken the opportunity to invite members of our Club to join them at this conference as well as at their 43rd Charter’s night on March 21, 2002. R.I President Richard King and other R.I Past Presidents and R.I officers will also be their guests.

Anyone who is interested in attending should please contact President Ramesh prior to 20th February, so that he can confirm to RC of Taipei North, who have offered to make hotel arrangements.

The program will be as follows:

Since Friday 15th February will be the 4th day of the Chinese New Year and a lot of members are likely to be out of town, the luncheon meeting will be cancelled on that day.

Household Maintenance Service for the Elderly

A reminder that International Service Director Brian is arranging a visit to St James Settlement at 10.00 am on Sunday 27th January, to inspect the decoration/maintenance sites of flats for the elderly. This Rotary year, our Club has contributed HK$50,000 to St. James Settlement for their use on household maintenance services for the elderly who are living alone. This visit will show us how their volunteers decorate and maintain the flats.

Anyone interested should please respond to Rtn Brian by e-mail. Further details will be announced as soon as possible.

Visit to Children’s Orphanage in Nanchang

A big thank you to the volunteers joining me for the trip to the orphanage in Nanchang:
PE David; VP Nic and his wife Winnie; PP Gilbert; and SAA Frank.

Holt China Children’s Services will be making the flight and hotel reservations for us and I will let you know how we should pay them in due course. Please be reminded that you will need to arrange your own visas for China.

THIS WEEK IN HISTORY …

Sunday 13th January
1929 – Wyatt Earp (born 19th March 1848) died at the age of 80. Frontiersman, Gunslinger, Law and U.S. Marshall of Tombstone, Ariz., Earp led the legendary gunfight at the O.K. Corral.
1942 – Henry Ford patented the plastic automobile, which allowed for a 30% decrease in car weight.
1982 – An Air Florida 737 crashed into the capital’s 14th Street Bridge after takeoff and fell into the Potomac River. 78 people were killed.

Tuesday 15th January
1559 – England’s Queen Elizabeth I (Elizabeth Tudor) was crowned in Westminster Abbey.
1892 – “Triangle” magazine in Springfield, MA published the rules for a brand new game. The original rules involved attaching a peach baskets to a suspended board. It is now known as basketball.

Wednesday 16th January
1547 – Ivan the Terrible was crowned Czar of Russia.
1572 – The Duke of Norfolk was tried for treason for complicity in the Ridolfi plot to restore Catholicism in England. He was executed on June 2.
1759 – The British Museum opened.
1982 – Britain and the Vatican resumed full diplomatic relations after a break of over 400 years.

Thursday 17th January
1893 – Hawaii’s monarchy was overthrown when a group of businessmen and sugar planters forced Queen Liliuokalani to abdicate.
1912 – English explorer Robert Falcon Scott reached the South Pole. He only then discovered that Norwegian Roald Amundsen had beaten him there by one month. Scott and his party died during the return trip.
1995 – More than 6,000 people were killed when an earthquake with a magnitude of 7.2 devastated the city of Kobe, Japan.

Saturday 19th January
1942 – The Japanese invaded Burma (later Myanmar).
1966 – Indira Gandhi was elected prime minister of India.
1969 – In protest against the Russian invasion of 1968, Czech student Jan Palach set himself on fire in Prague’s Wenceslas Square.
1995 – A network of caves were discovered near the town of Vallon-Pont-d’Arc in southern France. The caves contained paintings and engravings that were 17,000 to 20,000 years old.

Sunday 27th January: Club visit to St James Settlement at 10.00 am to inspect the decoration and maintenance of flats for the elderly.

Friday 1st – Sunday 3rd February: Visit to orphans in Nanchang, China with Holt China Children’s Services, to deliver Chinese New Year gifts and other needed provisions. Departing HK at 11.25 am on 1st Feb and returning at 10.15 am on 3rd Feb

Sunday 3rd March: The District Badminton Tournament 2001-2002 is being organised by the RC of Peninsula South, at Western Park Indoor Games Hall. The tournament will start at 9.00 am and is expected to finish by 4.00 pm. The fees are HK$250 per person per event, with water and a sandwich lunch included. The events will be Men’s Doubles, Men’s Singles, Ladies’ Doubles, Ladies’ Singles and Mixed Doubles. For enquiries contact P.F. Tsui at Tel : 93054112, Email : pftsui@hotmail.com.

Saturday 16th & Sunday 17th March: The District Conference will be held at the Shangri-la Hotel in Tsim Sha Tsui East on 16th & 17th March 2002. The official Conference opening will begin at 2.00 pm on Saturday 16th.

The level of human suffering and migration has never been seen before on this planet. Tiny children with searching eyes gaze at us as to what has happened to them and why. Similarly, old men and women with tears in their eyes question desperately as what is their fault for which they are being penalized pushing them out of their home land and dwellings. The questions are such that any steel-nerved person can not stay without crying with agony irrespective of cast, creed, color or religion. This is the new millennium and this is the 21st century and doings of a limited group of people has destroyed a nation to the extent that another century is needed to recover.

These conditions when confronted by the Rotarians of Rawalpindi, which is located quite close to Afghan Border, led them to initiate a Project to provide some relief on the grounds that our objective is “Mankind is our Business”.

The Project is aimed at providing relief and introduction of Rotary in Afghanistan. The project will cater for shelter, food, clothing, healthcare, schooling and maintenance for 2,000 refugees for two years. The project is being established in the tribal area near the border of Afghanistan on the north west of Pakistan. The Afghan Refugees Commissioner, Government of Pakistan has agreed to allocate a site for the Rotary Hamlets Project.

This project has been registered with the WCS under #W0442 and is being published in the upcoming WCS Issue 2.

The Rotary Club of Rawalpind1 has opened a Bank Account # 01800571, Bank Alfalah Limited, 8, The Mall, Rawalpindi, Pakistan with the Title “ROTARY CLUB OF RAWALPINDI- ROTARY HAMLETS FOR AFGHAN REFUGEES” and the Rotary Family all over the world may contribute for this noble International Humanitarian Service Project. It is gratifying that Rotary International is supporting this Project and our club is confident we will accomplish it thereby creating a real impact that Rotary means business and that too for Mankind.

Mankind is Our Business!

Police arriving at the scene of a two-car collision found a totally nude woman behind the wheel of one of the cars. The 35-year-old L.A. resident was booked for investigation of reckless driving. She reportedly told police that when she began her drive, she thought she was a camel in Morocco, and when she saw the palm trees lining the down town streets, she was sure of it…