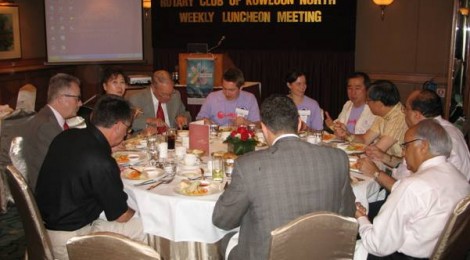 President Maureen was not in Hong Kong, and so were many members. However, the turnout was not too bad. We managed to fill a table. IPP Howard, being late, was asked to sit in a 2 nd table all by himself (!) – until a member (not hard-hearted Pauline!) pitied him and invited him to squeeze around the 1 st table. Poor Howard! 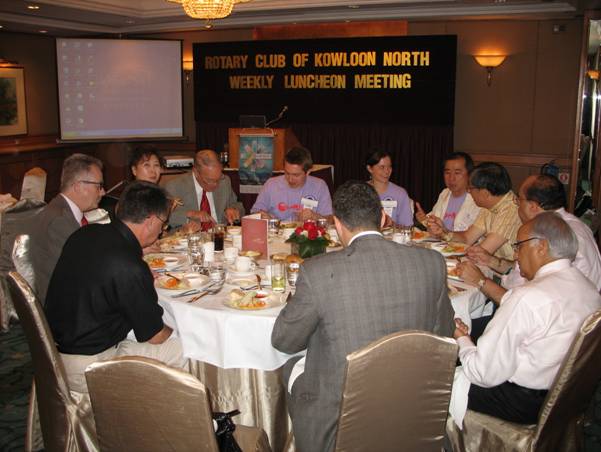 So, the Queen of the Manor today was PE Angela. PE Angela reported that PP Ramesh, PP Ian and herself went to the Induction last Saturday and it was a good experience. She expressed hopes that more members will participate next time.

The speakers today were David Cormode and Harley Burwell, two exchange university students from the UK. They came to HK for a few weeks to teach summer courses under PDG Joseph’s student exchange program. Their talk was titled, “Our teaching and cultural experiences in Hong Kong over the past few weeks”. We also have a guest, Mr Ivan Tam, who brought David and Harley to the meeting today.

David talked about the good times they had in HK while Harley talked about the hard work (hmm! How come guys always seem to get the better deal?). David explained that this trip was an eye-opener for both him and Harley. They heard of HK as a city with many buildings and no ‘green’. They came expecting many buildings, but to their astonishment and awe, HK is simply a jungle of tall and impressive buildings! Not only this, but everywhere they went, they saw plenty of ‘green’! They also found the transport system in HK amazing – goodness, fancy – a complex system that actually works (unlike in the UK)! They were also overwhelmed by the number of ‘bodies’ in HK. Everywhere is often, if not always, crowded with people. They enjoyed their stay in HK tremendously, and ‘swore’ to recommend this exotic city to fellow students back home.

David also showed us his prized memento – a dried up lizard (or something of that sort!). Would he hang it up on his bedroom wall or would he convince his mum to boil soup with it?!! 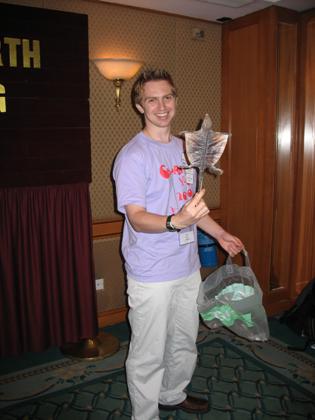 Harley enthusiastically described their activities in Hong Kong for the last week or so. Their main duty was to encourage children to learn English, but not necessarily to teach them English as they obviously did not have time. The aim was to stimulate interest in learning English. They had a great time with the students (ranging from little kids to secondary students). Students who wished to participate in these courses only need to pay five to six hundred dollars, and their parents can ‘get rid’ of them every day (I think it was Monday to Friday only) from 9 am to 4 or 5 pm for a week ¾ very good deal indeed!

PP Nic thanked David and Harley for their wonderful sharing. He also extended his thanks to PGD Joseph who is the liaison person for this exchange program. 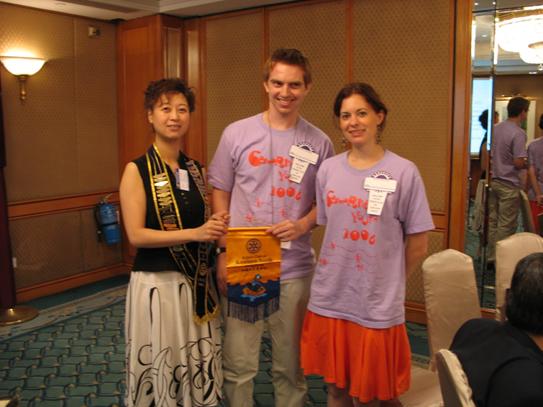 After PE Angela presented our speakers with our Rotary flag, David and Harley had to go ( 1.30pm) as they had a class to attend. The rest stayed behind to continue the discussion. Members agreed that this type of exchange program is very worthwhile indeed. These exchange students will not only know more about HK, but will also be our best ambassadors, helping us promote HK in their homeland.

At about 2pm, with a toast to RI, the meeting came to an end.