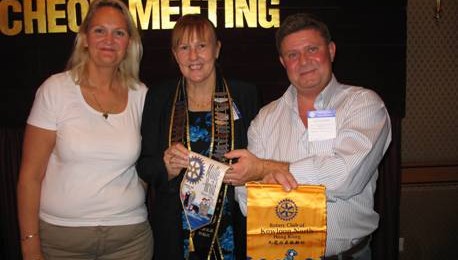 This turned out to be a very busy meeting indeed. We have a number of visiting Rotarians and guests, and three (yes, three!) speakers!

We have Rotarian Holmbeck and his wife from Sweden, Rotarian Gerald from France, Rotarian Takamori Suzuki and Koji Tanikawa from Japan, and Rotarian Angela Hui from Peninsula South. We also have a guest, Rotary Scholar Yamashita – PP Steve’s guest, and one of our speakers today. The other speaker John Yuen was President Maureen’s guest.

Members welcomed the appearance of Christina Noble, the founder of Christina Noble Fund. She popped in just to thank our club for its generous donations and support. CNF is receiving over US 16,500 (per year) from our club, supporting over 41 children and the salary of clinic staff. The money directly helped poor children with their education, nutrition etc. Christina also thanked the anonymous Rotarian from our club for sponsoring 13 children! Christina also informed members that they have a Medical and Social Centre in Vietnam, and members are invited to visit when they are in Vietnam.

PP Ian then reported that our club, to date, has supported about half a million to CNF. PP Nic thanked Christina for her tremendous work and effort which gain nothing less than profound admiration from all members. A round of applause for Christina for her work, and cheers to our club members for their generous support. (Christina then left the meeting as she has another appointment).

President Maureen then announced some good news. For the LAP in Nanning, a mystery sponsor (no need to guess who right?) has agreed to sponsor 90% of the amount required. We only need a further $5000 to make up the $55,000 needed to upgrade the LAP living conditions. Rotarian MS very generously offered to sponsor the $5000!

(post meeting note: The amount collected will be used to support the LAP housing as the upgrading needs to be done ASAP. The money raised from the sale of the Leprosy book and ethnic minority bags will be used to help those in need in very poor villages in Guangxi, identified by Winnie and Jimmy from Habitat. If possible, we will arrange a trip to visit these sites the next time we go to Guangxi.)

Rotary Scholar Ms Yamashita gave her talk. She started with a Japanese song, Sakura (Cherry Blossom). She introduced the cherry blossom as this flower is used widely in Japanese culture. The cherry blossom is also used in food, and Ms Yamashita said that Sakura was also played in Madame Butterfly, a famous Italian play; Sakura has been played in many countries as a symbol of international goodwill and friendship. She also hoped to see better relationship between the Chinese and Japanese, and she is learning Putonghua. She is now studying Anthropology in Chinese University. She thanked the Rotary Club for giving her this opportunity to be an ‘ambassador’ for Japan.

Rotarian Colman was called upon to give a vote of thank Ms Yamashita.

Since time was running out, it was decided that John, the next speaker, will be invited back to speak another day. John very kindly acquiesced.

President Maureen informed members that there is a trip to Ang Hui, China on the 10-12 Nov ¾ District Hepatitis B vaccination. Members can join if they would like to help with giving vaccine!

The collection for today’s meeting was HK$1220, 10,000 yen and S$10, including fines from Ian and Maureen for leaving their mobiles on!

A toast to RI and the meeting ended. 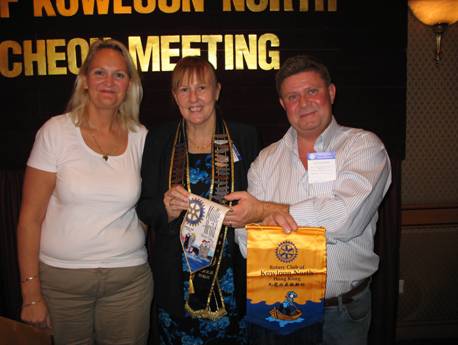 Rotarian Holmbeck (Mr & Mrs) from Sweden (above), Gerald Ngo From France (below) 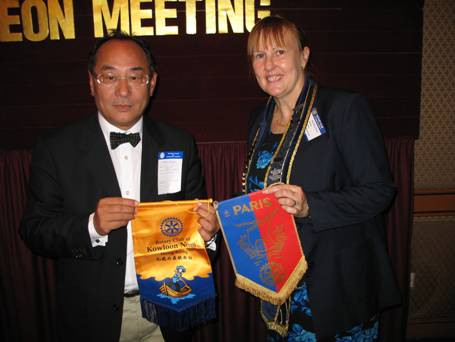 and Angela Hui from Peninsular South; Takamori Suzuki and Koji Tanikawa from Japan (below). 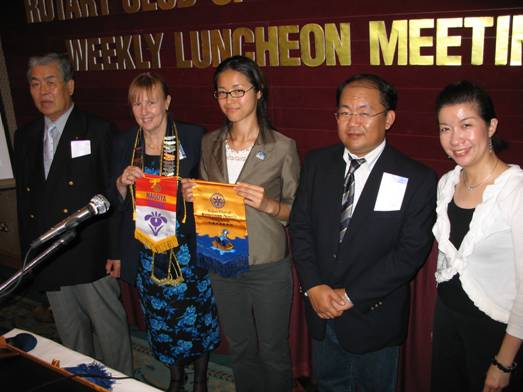 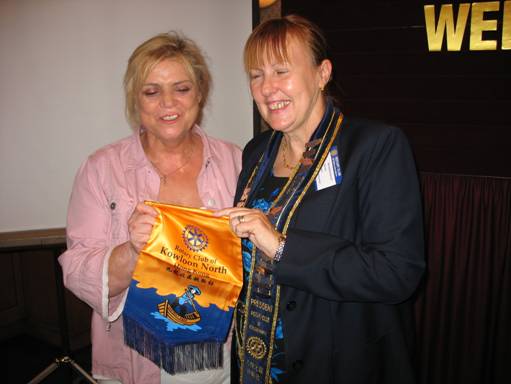 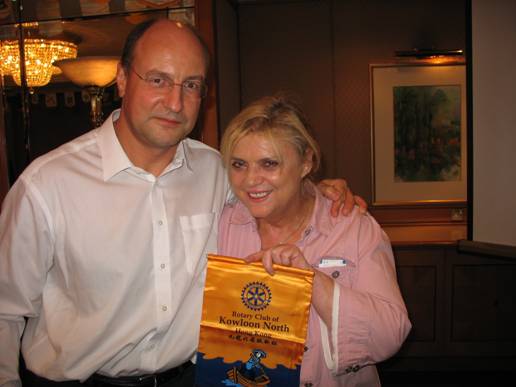 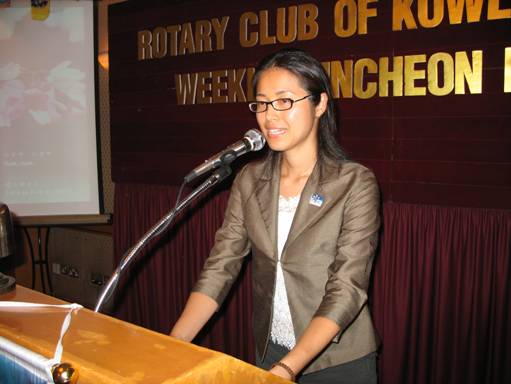