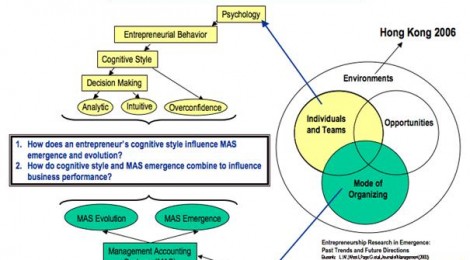 But before the Doctor was in and on, we were cheered by a parcel delivered to fellow Rotarian Bruce Stinson by our sister club of Taipeh North in gratitude for his part in organizing our participation in their anniversary celebration: proudly and honored he took away two boxes, a baseball cap and the bag that had contained the loot and has of since become a fixture in the Stinson’s daily shopping gear.

Amazing news after the slight set-back to the 6-Club Project: as reported, RCKN had finally found a worthy means to their ends in a US$ 29,250 contribution to an earthquake relief project of Handicap international. The application for the matching grant had been fully supported by the District but as the TRF had less money for this year owing to losses during the financial crisis, the grant had been rejected and the venture was yet again left to our wily Treasurer Ian Peterson’s own devices.
Now, the District had raised money in 2007/08 after the earthquake. RCKN had contributed HK$25,000 and since every dollar spent through the club is almost turned into a homing device by Ian Peterson’s thorough followup, he knew that HK$300,000 from the District’s Sichuan Disaster Relief Fund was still left over undisbursed.
Today it was his pleasure to report that to the US$ 5,000 raised by our Club and the US$ 8,000 chipped in by the several other clubs, an additional amount of US$ 16,000 had been raised from the district and the Project was ready to go, possibly starting in April 2009
From hence, no amount of forced Rotary-Song singings shall ever obscure this dazzling example of what an involvement in the District can actually help to achieve!

But now to something completely different:

So David Bruce is finally back to our Club’s long array of Davids and along with him was a fine Phd [prounce „ffft“]. And if any one had wondered what took him so long – today brought us the answer! And if anyone ever wondered, really really wondered how entrepreneurs influence the development of management accounting information systems – our Fellow Rotarian David has gone the extra mile for all of those and gave a sportful presentation of the encounters and adventures his walk on the wild side has led him by.

Fears that the subject matter might be of a slightly dry consistency proved premature, as the Rotarian mind is not just limited to constantly asking itself those wise four questions, but lives in awareness of a professional specialisation that doesn’t always lend itself to cracking party conversation (we’ve got surveyors, civil engineers, mortgage lenders, mind): David therefore greatly focused on the personal aspect of his quest, the questions „What did I do“, „Why did I do it“, „When and How did I do it“ and the summary „So What?“ encompassing a little section on „What did I find out“.

He regaled us with a-, be and c-musing stories about how his search for sources had led him to mingle with people he felt to be twice as brilliant and half his age; he included a picture where Gandalf seemed to be surrounded by a bunch of Hobbits (they turned out to be the Babson Doctoral Consortium in Boston); he told about the Multivariate Summer School in Montreal, Canada, to the background of a Jazz Festival they all attended; he had been In Like Flint all over the world, in Brisbane, Adelaide, Madrid, Kenia and Argentina; in short: he made the gathering of academic flotsam, the excitement of intellectual progress the heart of his story – which as such could have been told about any one who awakens to a calling to put his passion into an unwieldy book that might allow whoever else out there with similar strange interests to follow and to take it from wherever he was led to, no matter whether it’s about accounting, hurling, curling, caber- or dwarf tossing. David even had the charity to follow experienced fellow academic outsider Maureen’s advice and brighten up his more in-detail slides with the image of a tree so that the experience never felt less than a walk in the park… 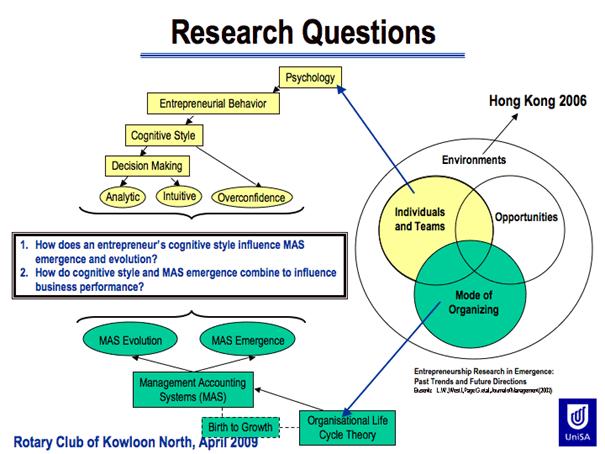 Well, but of course there was the academic side to all that:
On that one, David, a seasoned dabbler in all temporary and lasting fads of the economy, had lived through too many bubbles not to tear his hair about what it was that allowed some to grow where many went bust. An accountant himself, it was natural for him to pinpointed the development of management accounting systems (MAS) as the crucial factor to expanding a business to it’s potential. What however no one else had looked into before our fellow Rotarian was the influence of the entrepreneurial mindset in the MAS development process: according to his findings, these guys are best characterized by their degrees of overconfidence (because in fact this is what business is all about: believing in an opportunity and getting others to develop a similar sentiment), and this overconfidence is perched on a mixed base of analytic and intuitive decision-making. So how does that mindset fit in with something as factual as an accounting system?
David conducted an extensive questionaire survey and lots of interviews among Hong Kong can-do geezers to check whether there was a relationship between levels of intuitive and analytic decision-making styles and the speed of MAS development and whether levels of overconfidence also influence the speed of MAS development. As the ability to switch from analytic to intuitive is the key to cope with change, the need for management accounting systems (MAS) occurs after emergence and involves system changes in response to people, events and environment (in his presentation, there were lots of trees on the slides at this stage). Here now, maybe again unsurprisingly, it turned out that for entrepreneurs with a high preference for analytic decision-making, the earlier they introduce MAS, the more likely their businesses grew, whilst the intuitive ones kept on dawdling about and were more prone to rely on someone within their organization to keep the accounts right, which normally fails.

This said, the 800 page tome of „How Entrepreneurs Influence Management Accounting System Emergence and Evolution: The Role of Cognitive Style“ should become the preferred paperweight of every aspiring entrepreneur and was therefore fittingly bound sleek and elegantly to look like the mysterious black, rectangular monolith out of „Space Odyssee 2001“. And as David proved to us in an extracurricular feat of physical proficiency: that monolith CAN be lifted and waved above one’s head, if you are cheered to try it.

And as to „So What“: One of the entrepreneurs who had gone through the arduous interviews with David had finally deceided to take the Doctor on board of his enterprize – and this is what learning will get you. Thanks David for the inspiring lecture and apologies for probably oversimplifying or miststating some aspects: the proof of this pudding is NOT in the eating over luncheon but in the baking of it – it gin a wye o spikkin’s richt hannlet, fa’s tae say bit fit (but if a way of speaking is handled right, who’s to say but what)

We were again kindly reminded of the ball in HKFC on May 16th, hosted by RCKN and themed, after the reluctant abandonment of „Apples and Tarts“, to be „Pirates of the Rotarian“.

So much for this time,