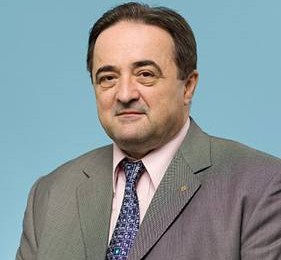 all but a very, very few of you can consider themselves lucky they didn’t attend President Tibor’s debut performance: he even missed the bell trying to open the meeting, had no really important announcements to make, prepared some 15 pages to seriously expound each possible aspect of the comming Rotary Year 2009-2010 (including his aim to engage in smaller scale projects, preferably Hong Kong local for better on-site involvement or our members) and, before having produced anything worth writing down, now tried to discommode his four past worthy predecessors (PWPs) by reminding them that their respective term’s reports where yet missing from the Club’s records, otherwise unbroken since 1964… He was finally invited to please leave the lectern and join us for lunch, where he then imposed discussions on the Club’s website and member classifications.

All this of course did not prevent the Club’s conversation to develop its usual range of fascinating subjects: Our new member PP István from Hungary, who gets his introduction below, usefully taught us how to kill people with 20 kilo of dry ice in just one night by hiding the load under their matrass, their desks or elsewhere close by; we then were enlightened on the closely related topic of the Bermuda Triangle, where all the famous disappearances were merely due to periodic methane eruptions in bubbles from vast subterranean fields of methane hydrates. Those produce regions of frothy water of decreased density which then is no longer capable of providing adequate buoyancy for ships, thus causing them to sink very rapidly and without warning. And PP Ian told of his trip to similarly renowned South Africa in a group of 28 people, emphasizing that no one gauged his eyes during the trip. This left us with a totally new impression of that part of the world, and that is, isn’t it, what these meetings finally are made for!

The new Sampan has 2 Sections:

Shortly before present IPP David had handed over the Presidency to his yet bumbling successor, the Club had received a proposal for membership transfer to RCKN of István T. Horváth, a Past President of the Rotary Club of Budapest-Sasad in Hungary. After spending almost 10 years at the Institute of Chemistry at Eötvös University, Budapest, as a Professor, István had recently moved on to work at City University of Hong Kong as the Chair Professor of Chemistry and Head of Biology and Chemistry.

While he attended a number of our weekly meetings over the past several weeks, we had carefully sounded István in casual conversations, finding, amongst other things, that he received his Diploma in Chemical Engineering (1977) and Ph.D. in Chemistry (1979), both at Veszprem University (now University of Pannonia), Veszprem, Hungary. He apparently had worked as a Postdoctoral Research Associate at Yale University (1982 – 1984), later as a Scientific Co-worker at the Swiss Federal Institute of Technology (ETH), Zurich, Switzerland (1984 – 1987). After that, he had pursued an independent career for 11 years as a Senior Staff Chemist at Exxon Research and Engineering Company (Annadale, New Jersey). In 1999 he returned to Hungary as a Professor at Eotvos University (Budapest).

Chatting with István, one couldn’t help noticing that his research interests center strongly on green chemistry with an emphasis on homo­gene­ous transition metal catalysis, organometallic chemis­try, and in situ spectroscopy. He has re­cently ap­plied himself to questions of biomass conversion, praising in particular the faculties he discovered in gamma-valero­lactone after

He mentioned over 150 scientific papers, book chapters and patents he had published. In his spare time he had been the Editor of the Encyclo­pedia of Catalysis (6 Volumes) and the co-editor of the Handbook of Fluorous Chemistry, which was based on the fluorous biphasic concept that he himself invented in the early nineties. Well done, István!

Needless to say, István had chaired numerous meetings and symposia in the areas of green chemistry and catalysis. He was the Chairman of the COST Action D29 on Sustainable/ Green Chemistry and Chemical Technology (2002-2007), was awarded a D.Sc. in Che­mistry by the Hungarian Academy of Sciences in 1998 and was a Szechenyi Professor Scho­lar (2000 – 2003). He received the 1st Fluorous Technology Award in 2005, the Humboldt Re­search Award in 2006, and the Green Chemis­try Lecture Award in 2008.

In the course of our deliberations someone actually said he believed „István will be a major asset to RCKN“. Luckily however, the decision didn’t have to be based on these rather befuddling matters of high academic achievement and those of us from softer intellectual backgrounds were most glad to speedily welcome our new member, Professor István Tamas Horváth, 1. on account of his great sense of humour and 2. the fact that he comes across as a committed Rotarian and 3. that the Club is quite proud to finally boast a member classified as „HIT-Man“.

(While most of the above has of course been scraped together from the Internet, those interested can start to find out more at this link: http://www6.cityu.edu.hk/bhdbapp/staff_profile.asp?staffID=83)

2. Lunch Meeting – 3rd July 2009 President Tibor: that part of his speech which he held

A bit emotional to suddenly find himself all alone on this vast stage, adorned with the ill fitting president’s collar that chinkled with the badges of former PP generations, President Tibor spontaneously addressed the assembly with some heartfelt words that came to his mind, „dear friends,“ he said, „I think I may be pardoned if I do not address you at any length today, and I hope that any of my friends and colleagues or former colleagues who are affected by the new presidency will make all allowances for any lack of ceremony with which it has been our lot to act. I have nothing to offer but blood, toil, tears, and sweat. We have before us an ordeal of the most grievous kind. We have before us many, many months of struggle and suffering. I take up my task in buoyancy and hope. I feel sure that our cause will not be suffered to fail among men. I feel entitled at this juncture, at this time, to claim the aid of all and to say, “Come then, let us go forward together with our united strength.”“.
He then referred to his notes and asked whether we now wanted to share with him the details of his plans for the next several months. When no one wanted to he was relieved and happy to join us for lunch.

No Announcements this time

That’s it for this time, folks – we will keep you posted on other matters arising – once they do,