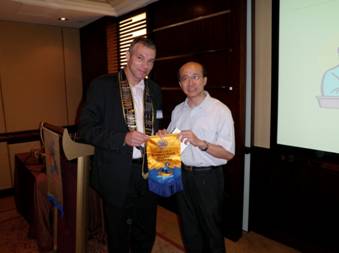 Today’s meeting began with a bit of a food scare when a grammatical slur in the menu left us very tense in anticipating an Indian dish where fish and lamb had been cooked together in one pot – an unease not even lifted by the assurances of two of our Indian members attending that such a creation was quite unthinkable even for a chef as creative as the Indian cook employed at the Holiday Inn Golden Mile since fellow Rotarian MS actually growled about the future of this cook in ominous tones, thus proving the vague possibility of such an abomination even to his countrymen. However, the cook was entirely exonerated with the arrival of the cates in line with the traditional and natural segregation of land and water and everyone merrily tucked in – and happily before we heard what today’s speaker had to say about the possible causes of Diabetes.

The new Sampan has 2 Sections:

Diabetes is a disease in which the body does not produce enough, or properly respond to, insulin, a hormone produced in the pancreas. Insulin is needed to turn sugar and other food into energy. In diabetes, the body either doesn’t produce enough insulin or can’t use its own insulin as well as it should, or both. This causes sugar to accumulate in the blood, increases blood pressure and leads to mainly blood vessel related complications (eye, brain, kidney, cardio, you name it – oh yes, and erectile dysfunction was mentioned, concerning which a long-term study had just recently established a higher risk for heart failure… it’s endless).

Diabetes is non-infective and caused by the sedentary lifestyle of our times paired with depraved gluttony. It is the yin, where obesity is the yang.

As its symptoms in the diseased are non-specific (fatigue, dry mouth, passing of tremendous amounts of urine, constant hunger or thirst – the usual morning for all and sundry), most people don’t recognize when they have developed Diabetes.

Thus called „a silent disease“, it is massively on the rise in Asia, the Middle East and South Africa, so much so that it was even called „the Asian Disease“ in an article in Time Magazine 2002. Dr. Tong reckoned that every 10 seconds 2 people develop diabetes – so when he began his presentation at 1:30, 360 new cases had occured just over lunch!
He estimates the number of unreported cases to amount to 10% of the Hong Kong population, where no proper survey has ever been done thanks to Dr. Margaret Chan, the Director of Health of Hong Kong since 1994 before moving on to become the Director-General of WHO.

Nowadays, if you grow to get beyong the age of 65, there is a 25% chance to get diabetic – and the chances increase exponentially with even higher age, the worse: the pancreas just stops producing enough insulin. The new development in the history of Diabetes is that more and more young people are affected by it – in genetically caused diabetes, where grand parents got it wit 60, their children got it at 40 and their grand children suffer from it at 20.

Dr. Tong then elaborated that the Chinese react differently from Caucasiona to complications of Diabetes, starting with a different definition of obese in East and West, the fact that 1/3 of the affected will not be traced through blood tests because of strong blood glucose fluctuations in the Chinese.

As treating Diabetes is very expensive (a kidney transplant, dialysis), Dr. Tong urged us to take control of our health NOW: a simple lifestyle modifications with dietary restric­tion and

moderate amount of regular exercise is effective in reducing the risk of developing diabetes. A simple gauge is to monitor the waist circumference. For Chinese, waist circumference for male and female should be less than 90 and 80 cm, respectively.

Other than that, Dr. Tong provided a very simple rule of thumb for universal application, almost like the Rotary Four Way Test – The „ABC + 2A“ Test:

Discussions kept the attending Rotarians at the table well beyond the usual closing of the luncheon at 2:10 and once again we were glad there had been talk about an issue that everyone could relate to.

(for the ophtalmologist’s take on Diabetes see previous Sampan http://www.rotary3450.org/kowloon-north/sampan/v9/003/)

Rainy Ma of the Rotary Information Centre informed that Rotary International President John Kenny will be visiting Hong Kong from 6 to 10 August 2009.  An InterCity Meeting will be organized to honour his official visit.  This is an excellent opportunity for all District 3450 Rotarians and friends to hear the thoughts of the current RI President who of course is the key-note speaker for the evening.  Please don’t miss this chance to meet the RI President in person.

RCKN is considering to cancel the usual luncheon that day and get a table at the event – however, we are still establishing the true extent of member interest.

RCKN is invited you to come to the ceremony and to witness the office bearers of their Executive Committees taking their oath of office. A formal invitation letter, which will include the details of the ceremony, will be sent out soon.
For any enquiries, please contact their President Elect, Minian Cheung, at cwhy643@hotmail.com or their Incoming Internal Vice President, Zoe Yu, at yitak_jellykid@hotmail.com.

3. Friday 11th of September 2009
CUA Charity Golf for Hong Kong Society for the Protection of Children

President Tibor informed about a possibility to book a flight for 4 RCKN members (or more, actually) in a Charity Golf event hosted by the committee of the CUA Golf Society to raise funds for the Hong Kong Society for the Protection of Children (HKSPC).
The date will be Friday, September 11, 2009 at the beautiful and challenging East Course of Kau Sai Chau. The CUA Golf Society is organizing 25 teams of 4 players each and a team may donate as much as the team members desire but the minimum contribution per team will be HK$ 8,800 which will include all green fees, golf cart, prizes, dinner and transportation cost. All proceeds after expenses will be donated to HKSPC for their Child Care Service.

The Hong Kong Society for the Protection of Children was established in 1926. As one of Hong Kong oldest and largest charity organization its mission is to help children of needy HK families in the area of Child Care Service. HKSPC currently runs 26 service units throughout Hong Kong including 5 Creches for newborn infants; 18 Nursery schools for young toddlers; a Children Residential Home for orphans and abandoned children and a Family Services Centre to strengthen and stabilize family ties. Although HKSPC is subvented by the HK Government, it is not a member of the Community Chest and rely on direct donations to cover part of its expenses and to expand its charity service coverage. CUA Golf Society is now helping HKSPC to raise part of its fund for their worthwhile projects. For details on HKSPC and their charity work in Hong Kong, please log on to : www.hkspc.org

Unfortunately the meeting closed in a bit of a mess with PP Ramesh left standing without the chance to deliver his thanks to the speaker – an address which he was the most deserving member to give as he had used the past several months like no one else to rid himself of a diabetes candidacy by losing so much weight that the Club had to consider reporting the loss of one member notwithstanding the fact that Rotarian Ramesh is of course still part of us, but halved in terms of net-membership…

That’s it for today, folks – more about more as soon as we can: