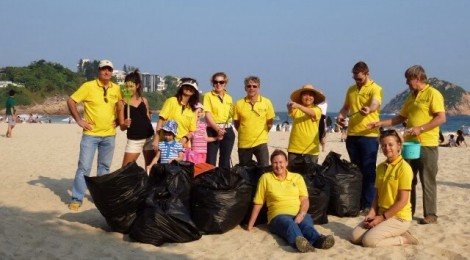 Five Rotarians and eight friends and family spent a couple of hours cleaning the beach at Shek O on October 26th. It was a beautiful afternoon to be on the beach. Initial view of the beach made us wonder if we would have anything to do – the central area was all clean – but the edges were a different story. Within two hours we ad filled 10 giant black bags with rubbish. The most common items were polystyrene containers and broken pieces. Other common items were cartons, cans and plastic plates. Strange items included an electric toothbrush, prescription sunglasses, a bottle of nail varnish and a giant size roll of duct tape.

We congratulated ourselves by a late lunch at Shek O Thai accompanied by a few beers. A worthwhile way to help and have some fun.