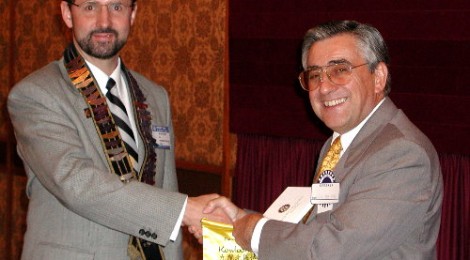 The regular luncheon meeting on Friday June 29 saw the end of Bill Benter’s Presidency and the beginning of the Ramesh Chugani era. The meeting began with a spirited talk from Rotarian Bob Pope, Director of the Lands Department, who highlighted the contribution made by Land Development Policy to Hong Kong’s prosperity and vigorously defended his Department’s approach from criticisms stemming from “certain journalistic quarters”. Unfortunately for members’ wealth he did not provide a definitive forecast for the property market over the next six months! 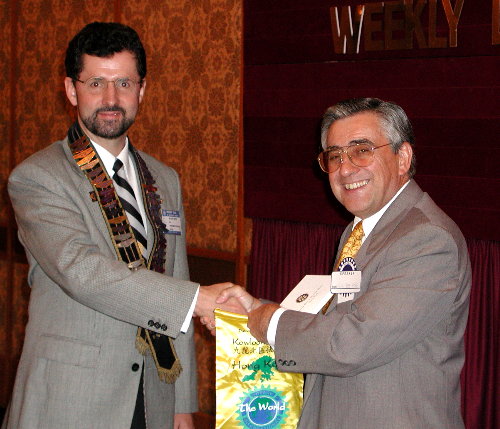 President Bill has the honor of of presenting his last banner to Rtn. Bob Pope

David Lindsay, one of Bob’s former employees, proposed the vote of thanks after which the proceedings moved on to marking the end of the Rotary year and the change of Presidency.

President Bill made a short speech, noting that the club has had a good year, inducting 5 new members and pursuing a whole range of ambitious and worthwhile projects, including Camp Quality, the Schools in China project, Milk for Children in China and Help for the Elderly. Thanks were made to all of Bill’s team including Brian Wong for his work on Community Service, PE Ramesh for behind the scenes efforts and David Lindsay for organizing an excellent weekly programme of speakers. Bill also reported on his visit to the Annual Convention of Rotary International in San Antonio, drawing attention to the impressive scale of RI’s programme, with aims like the total eradication of polio worldwide, and the mammoth levels of funding being directed towards these aims. 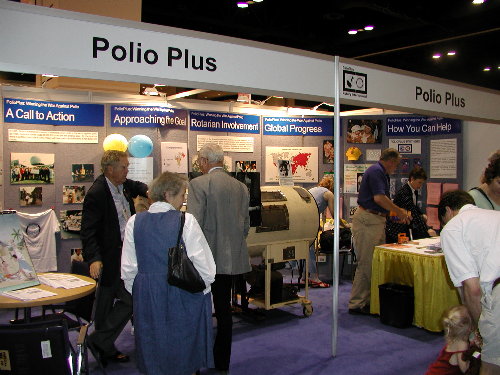 The Polio Plus booth at the RI Convention

IPP Bruce Stinson made a heartfelt vote of thanks to Bill for all of his hard work, reminding members of the tireless efforts and talent that Bill has brought to the club, and to the District, through his work on Website development and his enthusiastic participation in all things Rotary. Bill’s outstanding philanthropy, and his habit of quietly giving the Club the credit for his very significant contributions, is a prime example of the very best that Rotary can offer.

“IPP” Bill then passed the Presidential sash to Ramesh, in advance of his District-level installation on July 6, and Ramesh added Bill’s nameplate to the sash’s roll of honour and presented him with his diamond-studded “PP” pin. Ramesh, too, made thanks to Bill for his year’s work and vowed to keep up the good work. 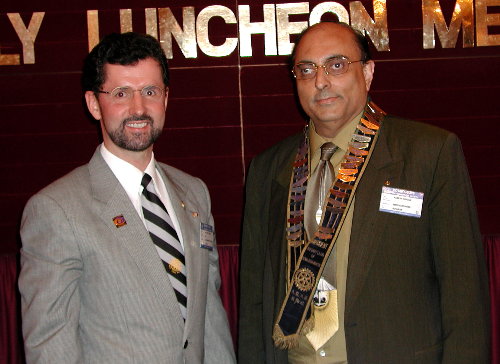 All members are invited to attend the District level installation on Friday July 6, at the Hong Kong Convention Centre.

The next few weeks tend to be a quiet period in the Rotary year as members leave town for holidays. We are all reminded to “make-up” wherever possible, in order to make new friends and contacts, and to return ready for another active year, this time under the able guidance of Ramesh.

As promised, Ramesh has gotten off to a fast start by calling a board meeting only three days into the new Rotary year. 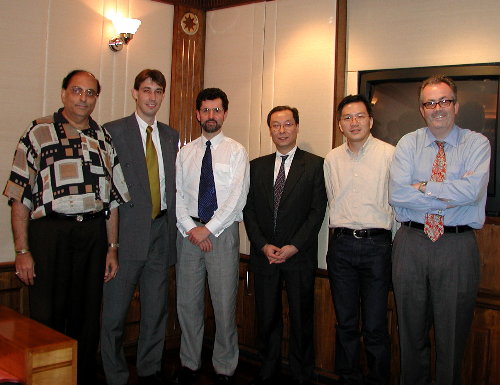 This Friday’s speaker will be Les Whittle from Holt International, who has been our local partner in the “China Baby Formula Project“. Les will be telling us the interesting story of adoption and foster care in China, and how our contribution is helping. Please be there to welcome this good friend of our club.

I look forward to seeing you all there.