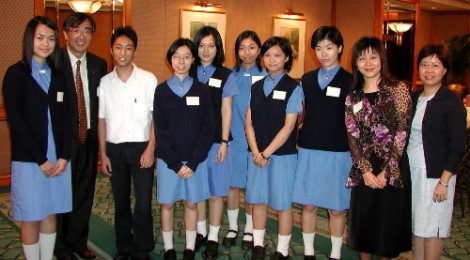 Well, this is my first effort at producing The Sampan, (which is ably assisted by IPP Bill’s technical support).  We have a rotating committee of 4 to bring you the news, but our schedule is a little tricky at the moment with so many people away for the summer.  As witness last Friday’s meeting, which was very short on Members who were outnumbered by our guests and visiting Rotarians.  We were joined for lunch by 3 visiting Rotarians (all PP’s), 2 guests, and 8 young Interactors from Tang Siu Kin Secondary School who were accompanied by their teacher, Ms Hailey Chu. 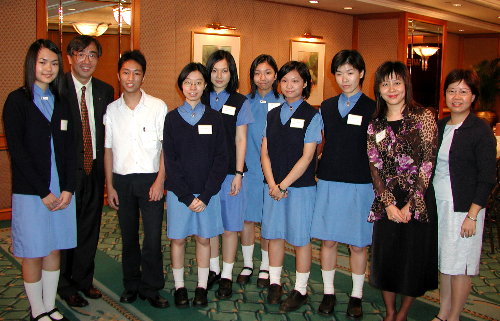 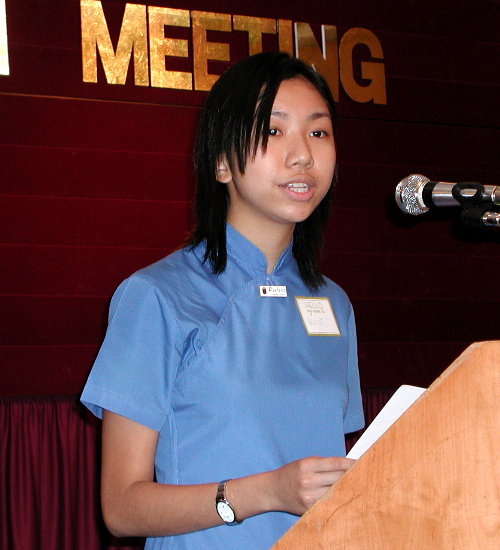 The President of our Interact Club

So, for those of you who are still here, read on and I hope, enjoy.

President Ramesh was wished well for his year ahead.  Details of the District Installation Ceremony, which was postponed due to Typhoon Utor, follow later.

President Ramesh announced that IPP Bill had received a special mention at the recent Annual Convention in San Antonio, for his generous contributions to Rotary International.

2nd July:  At the last Friday luncheon, belated birthday wishes for 2nd July were bestowed upon Rtn. Susie Young, who suffered through an appallingly out of tune rendition of Happy Birthday.  I think we all need to take singing lessons!  “Belated” due to Susie’s trip to Chiang Rai in Northern Thailand (read her report on that trip later).  Susie shares her birthday with the infamous Imelda Marcos – which must explain her penchant for shoes!

1947 – An object crashed near Roswell, New Mexico.   The U.S. Army Air Force insisted it was a weather balloon, but eyewitness accounts led to speculation that it might have been an alien spacecraft.

7th July:  Birthday wishes also go out to PP Robert Ho who, along with Ringo Starr of The Beatles and David Hodo of The Village People (is there any connection between these three??)  celebrated his birthday on 7th July.

1967 – The Monkees open a national tour with Jimi Hendrix as the opening act. (Disparity or what!)

25th July:  Our last birthday boy this month is Membership/Classification Rtn. Michael Harilela who shares his birthday with Estelle Getty (Sophia of The Golden Girls) and Matt Le Blanc (aka Joey Tribbiani of Friends).

0326 – Constantine refused to carry out the traditional pagan sacrifices.

1984 – Soviet cosmonaut Svetlana Savitskaya became the first woman to walk in space. She was aboard the orbiting space station Salyut 7.

Last Week’s Speaker was Lynda Janas who gave us an informative talk on Customer Relationship Management (CRM).  Particularly interesting was the information that most of us only “listen” to about 35% of what we hear! 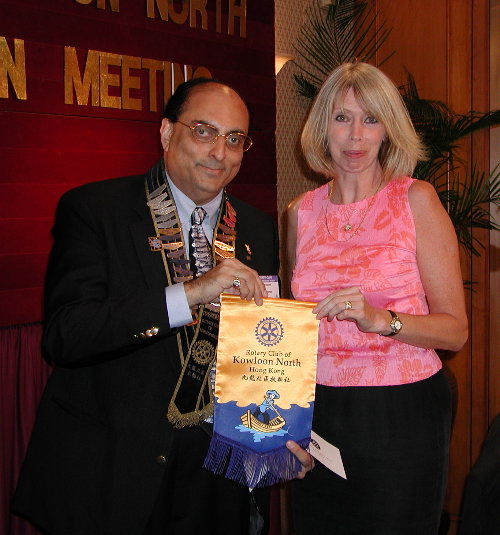 Although I would have to take issue with that – judging by the reactions of my fellow Rotarians (at least, the males of the species) – I would say that only about 10% of Lynda’s talk penetrated … and we all know which part that was, don’t we?!!

You have probably seen President Ramesh’s e-mail about IPP Tony Wong from the Rotary Club of Happy Valley, but this is a reminder that for anyone with an interest in photography, IPP Tony Wong intends to organize a DPF (that’s District Photo Fellow to us newcomers) in our District. Photography has been his favourite hobby for over 30 years and he sincerely wishes to enroll Photo Fellows in our District to exchange experiences as well as serving our District and Club activities.  If you are interested in joining, please contact President Ramesh so that he can fax you the forms to be filled and sent to IPP Tony Wong.

The District Installation Ceremony has been rescheduled to Friday 20th July and our Club has a table for 12 reserved.  I know a lot of members are out of town, and so we need the support of those of you who have remained even more than ever.  Please come along to show our Club support for incoming President Ramesh.  The venue is The Grand Hall, Phase II, Level 5, Hong Kong Convention & Exhibition Centre, Wanchai, Hong Kong.  You may arrive between 6.15 – 6.45 and we expect the evening – during which dinner is included – to finish up around 10.30 PM.  Still plenty of time to go out and paint Wanchai red!

As required by Rotary International, a new committee is to be formed – the Membership Development Committee, which will be chaired by PP Peter Lo.   The purpose of this committee will be outlined at aMembership Development Seminar which is being held on Saturday 4th August from 2:00 pm – 6:00 pm at: The Hong Kong Academy of Medicine Jockey Club Building, 99 Wong Chuk Hang Road, Aberdeen.  President Ramesh and PP Peter Lo will be attending the above seminar and the Club is looking for more Members to attend as we need a minimum of 5 persons.  If you are free on Saturday afternoon and can attend, please e-mail President Ramesh as soon as possible.

The Rotary Foundation Committee is another new committee being set up during this Rotary Year and which is to be chaired by IPP Bill.  Due to the fact that demand for matching grants unfortunately now outnumbers those applications granted (as we have experienced ourselves with our application for The Indian Well Project) the goal of the Foundation is to encourage every Rotarian to contribute US$100 per year, by the year 2005.  More details on this are available on Page 6 of the July 2001 issue of The Rotarian.

Friday 3rd – Monday 6th August: our sister club in the Philippines, the Rotary Club of Mandaluyong, will be visiting us in Hong Kong.   PP Gary is investigating entertainment options (at least, that’s his story and he’s sticking to it!) for 16 visitors and we’ll get more news to you closer to the time.  In the meantime, think about keeping that diary date open so that we can pass on some of the hospitality that IPP Bill and PP Steve received, when they visited our sister club The Rotary Club of Ama.

Wednesday 23rd February, 2005:  Rotary Centennial (just for those of you who like to plan ahead!)

At Friday’s meeting, President Ramesh presented Rotarian Susie with a cheque from our Club, for HK$10,000 in sponsorship for the work to be carried out on the Good Samaritan Children’s Hostel in Chiang Rai.  All sponsorship money went towards the work being done, as each member of the team paid for their own travel and accommodation.  Susie’s report on the very worthwhile enterprise, follows:

Eight adults and sixteen youths from Solid Rock Youth Group of Shatin Anglican Church, aged between 13 and 18 traveled to Chiang Rai in Northern Thailand to work in the Good Samaritan Children’s Hostel.  I was privileged to be part of the very enthusiastic team.

The Hostel is run to provide education to Hill Tribe Children from the Thai/Burma border.  Stateless, these people are looked down upon by the Thai’s and are unable to obtain any type of legal work until they reach the age of 21. The Director of the Hostel hopes that by enabling the children to read and write Thai they can convince the Thai government to allow them district working permits when they are 16.

The hostel was started by a Christian Minister (Thai) some years ago.  At the time he visited the hill tribes on a regular basis and on one occasion he visited them his elder son had just died.  As a way of showing their affection for him they gave him some of their sons – and he returned to Chiang Rai with 18 boys and so the home started.  The minister is still very much involved and his son is now Director of the Hostel.  Currently 100 children are at the hostel although they have had almost 200 at times.

For several months prior to the visit our youths had been fund raising to pay for materials to make playgrounds and paths for the home.  We decided from the outset that we would provide the labour ourselves as a service project.  The additional money raised purchased an Industrial fridge, PA system and  the building of steps to their meeting hall.

The work was extremely hard but gave everyone a personal sense of achievement.  The team spirit was amazing – everyone worked together – no-one shirked and over 140,000 bricks were laid in three days!  One of the highlights for everyone was turning up at a 5 star hotel for lunch after a morning spent hauling bricks in a very high temperature.   We neither looked nor smelt like 5 star guests but the hotel turned a blind eye (or covered nose) to our attire and were politeness itself.

The children were so friendly – used to having ‘oldies’ visit they were amazed that our teenagers would come so far and work so hard for them. They made them ‘friendship bracelets’ and certainly made our team realise how much they themselves had in comparison.

Each evening the children  performed a traditional dance from the various tribes to the delight of our team who did their best to emulate the steps.

We have now decided to try to provide regular support for the running costs of the home – even in Thailand to feed and house 100 children costs a lot of money!

This Friday we are lucky to have Dr. Hans Schrader of the Matilda Hospital on The Peak to speak to us. He will be giving a talk about Cholesterol.  Let’s hope we have a healthy, fat-free lunch this week.